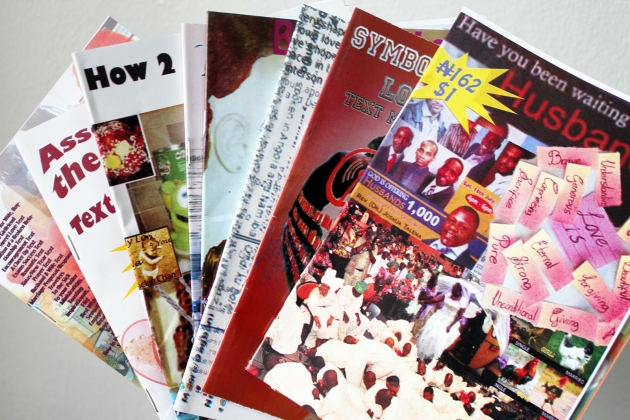 ‘The Fountain of Love’, a painting by Honoré Fragonard, offers a vision of a moment in history when the aristocratic taste for luxury reflects the imminence of revolution. The rococo masterpiece is part of a collection of European art and artefacts collected by Richard Conway-Seymour, the 4th Marquess of Hertford, who spent his inherited fortune – largely based on estates in Ireland – collecting pre-revolutionary art with notorious ferocity. An acquaintance said that he had ‘great natural talent and knowledge of the world, but uses both to little purpose, save to laugh at its slaves.’ The slavery of others is an experience simulated for those who walk freely through the hushed rooms of Hertford House in central London, Conway-Seymour’s former home and the location of the Wallace Collection. Slavery and fabrics, fruits of the commercial and colonial relations between Europe and Africa, enter into the picture when Yinka Shonibare views Fragonard’s work; Shonibare’s haunting installation piece, ‘The Swing (after Fragonard)’, was the inspiration for a recent art transnational exhibition, in Nigeria and America – The Progress of Love – which attempted to map out love in the African continent and its diaspora.

Unless you were in Lagos, Houston, or St. Louis in the last few months, you missed The Progress of Love, the three-part exhibition at the Menil Collection in Texas, the Pullitzer Foundation in St. Louis, and the Center for Contemporary Arts (CCA) Lagos, which closed last week. Love, as it is considered in various philosophical traditions, is a universalising emotion. How does this word, which appears in English from the primal swamp of the Indo-European language ‘family’ via old Germanic languages, came to name humanity’s most intimate relations and the general adhesive of our species? It is the limits of love’s universalism, its corruptions and ideologies, which makes The Progress of Love sound so interesting. In ‘Performing Love’, her essay for the catalogue, co-curator Bisi Sila opposed Love to the “grand narratives” of what Okwui Enwezor has called ‘Afro-pessimism’. Love, however, is manifestly an idea which allows the thirty artists included in the exhibition to consider the intersections between universalising phenomena and their regional appropriations or local resistances.

Love Text Message Book installation, part of The Progress of Love at The Pulitzer Foundation of the Arts (Photograph by Sam Fentress).

We spoke to artist Temitayo Ogunbiyi about her contribution to the exhibitions at Lagos and St. Louis. The Lovely Love Text Message Books was an interactive installation which engages with a popular phenomenon in Nigeria, of publishing books which describe the conventions of love.

Ogunbiyi: “I came across these contemporary love text message books by chance and was first introduced to Love Text Message books by Moses, one of my uncle’s domestic staff. He said to me, “Sista’, come and see this text whe’ I fit send my girlfriend”. I asked him a ton of questions about where he got it from. Then I started buying these books – I collected about 50.  They’re small, 32 or 34 pages, and typically they’re sold for [the equivalent of one USD]. I was fascinated … this fabricated love that people are actually using … the low literacy rates among people who use these books, why they pick particular ones over others. This guy, for instance, he couldn’t barely write or read so it was curious to see him holding onto this book, carrying it everywhere he went. 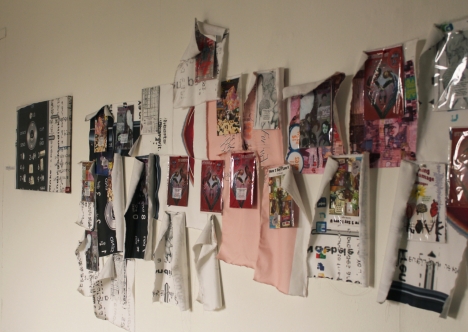 “Yinka’s most recent film was shown at the Pulitzer, and what I liked about that piece, was there was this diachronic access to love, as it was being formed. Looking at the colonial era as well as the contemporary means with which love is expressed.

“I showed a couple of the books to Nigerian writers and one suggested I look at Onitsha Market Literature.  I found that there were similar pamphlets first introduced in Nigeria in the 1930s, which were catering to a similar audience. There was this real interest in romance, teaching people how to romance the opposite sex—this could mean just talking to them. Some examples of these titles include How to Talk to Pretty Girls … How to Write Love Letters … and these were published from the 1930s until the late 1960s.

“I used my project to explore the structure of these books, how they differ from contemporary expressions of love in Love Text Message Books, and what happened in between the two eras with which these publications were associated.  Specifically, I was thinking about the Biafran war that ravaged the east, which was pioneering Onitsha Market Literature, and the years of military rule when creative expression was suppressed.”

“The books I created were responding to lots of different things. I archived images over the course of a year, researching Valentine’s Day, which is massive in Nigeria, crazy and intense. In the earliest form of pamphlet literature the form of love is one derived from Shakespeare, Western models of what love should be. It was interesting to think of Valentine’s Day and the spin-offs, the jokes that people had, the gifts that people were giving.

“All of the imagery that I used either came from an archive of images I have on my Blackberry, a couple from Facebook, and I did a bit of drawing. There are ten different book covers. At the Pulitzer, the books are on sale in a vending machine. We were selling them individually, in packs of 2 and 10. The packs of 2 are diptychs.

“At the CCA we set up an old-school book shop, with the shelves a bit higher than usual for those of average height.  It created a situation where the viewer didn’t know if they were allowed to touch the books or not. There was a text-messaging station with 10 different text messages.  Here, people could text anyone in Nigeria—for free!”

This invitation, offering to the viewer the chance to send a message to anyone, with the absolute condition that the love-gesture is selected from a set of ten conventional messages, speaks to the celebration of love’s freedoms and the regulation of its expression, a valuable example of love’s failure to fulfill its promise as a ‘universal emotion’. Fragonard’s vision of love invokes an aristocratic class whose paternalistic claim to care for the multitude had long been exhausted; the love represented at the Wallace Collection is, in part, the record of a mountain of exploited labour.

The Lovely Love Text Message Book project reflects, conversely, a conception of love reflected in and determined by cheap commodities, traditional and innovative ideas of love for a new reading class. It suggests, also, the tenacity with which love’s conventional demands – for playfulness and innovation within established limits – has traversed a century of huge social changes, somehow both transformed and unchanged. If there is such a thing as universal progress for humanity, love must be its destination, motor and origin. 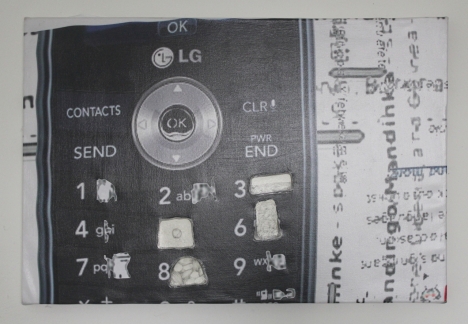 The online magazine Contemporary & has published reviews of The Progress of Love at CCA Lagos here and at the Menil Collection, here.