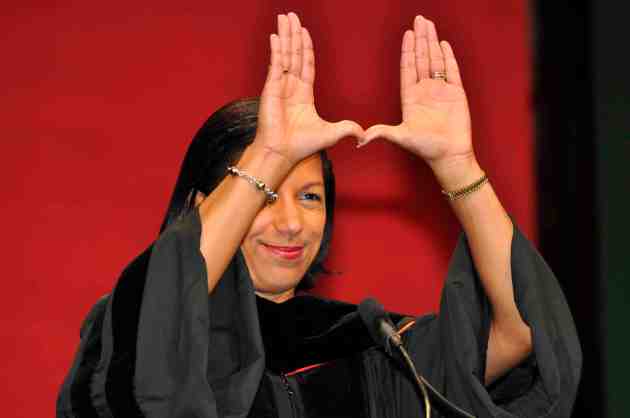 Remember Susan Rice, the U.S. Secretary of State who wasn’t? It might seem old news now, as Senator John Kerry sits in front of his colleagues seeking their constitutionally-mandated “consent” to his appointment to become the next U.S. Secretary of State, replacing Hillary Rodham Clinton. In the wake of President Barack Obama’s re-election in November, knowing that Clinton would not serve during his second term, the media and the blogosphere were abuzz with the idea that Obama would pick U.N. Ambassador Rice to succeed her boss. In the face of relentless critiques from both right and left, that nomination went down in flames before Obama had even officially made it. Let’s remember how noxious a moment that was, while asking whether it matters for U.S. policy in Africa.

Although she was at one point arguably its most influential member, Rice is not loved by the U.S. Africanist community (for what it’s worth). Apparently, she’s not loved by her colleagues and subordinates at State, either, and there are real critiques of the positions she’s taken on African issues over the years. But Republican senators and their allies did not spike her potential nomination because she wasn’t progressive enough, because she had not taken the high road in U.S. African policy, or because she is too close to unsavory characters like Rwandan President Paul Kagame. And they didn’t spike it because they thought she had misled the nation on the Benghazi attack that killed U.S. ambassador Christopher Stevens; that was a pretext, demonstrably false, not a reason. They spiked it because they knew that forcing Obama to fall back on his likely second choice, Kerry, would open up a senate seat in his home state of Massachusetts, in which they had just lost a hard-fought senatorial campaign (along with the presidential one). They also spiked it out of spite, and simply because they could. It’s no surprise that Republican senators represent a contemptible politics, or that their tactics are cynical and obstructionist. In this case, they had a lot of help, even mean-spirited and tendentious covering fire, from other quarters.

The ambush was also a cross fire. Whatever it was Susan Rice did to the New York Times, I hope it was worth it. On December 12th, the paper of record ran a piece arguing that Secretary of State had become too obvious an appointment for a “woman or minority member.” Of the last four secretaries, three are women (Albright, Susan Rice, Clinton), and two are African-American (Colin Powell, Condoleezza Rice). There had not been a White guy since Bill Clinton’s first term ended in 1997. The implication was that appointing a White male senator—a virtually redundant phrase, since the Senate is overwhelmingly White and male—would be a step towards diversity in the Cabinet. Go figure. This piece followed a series of others, some of them aggressive, running the fine line between reporting a story and generating a meme—in this case that Rice’s nomination was ill-advised and her confirmation impossible. I hope for his sake that they like John Kerry.

You can hardly read a story on Rice without encountering Samantha Power. I’m not the first to say that Power’s A Problem from Hell: America and the Age of Genocide (2003) is an excellent book; it won the Pulitzer Prize. Stronger testimony to its force, Bosnian friends told me its account of American passivity in the face of that country’s genocide made them weep and vomit, literally. On Rwanda, too, the book is stomach-turning. In recounting debates within the Clinton White House over what to do in the face of that horror—and more precisely, whether or not to identify it as a genocide, thereby triggering a treaty obligation to act to protect civilians—Power attributes Rice with a damning line that she’s never lived down: “If we use the word genocide and are seen as doing nothing, what will be the effect on the November [congressional] election?” (2003: 359). Rice was thirty years old at the time, “a rising star,” in Power’s words. Now, you can spin this in different ways. In my reading, it’s hardly more than hearsay. Some people say she said it, but there’s no citation or other evidence (Power’s source on it is the same military advisor who discounted the warnings of Romeo Dallaire, the commander of the U.N. contingent on the ground). Rice doesn’t remember having said it, only commenting that “if she did, it was completely inappropriate.” This is Bob Woodward style reporting—aka, unattributed insider gossip—but the nearly twenty-year old comment is one that hovers constantly over Rice’s reputation. One indirect effect of it—and the remorseful recognition that Bill Clinton was too timid in Rwanda—is that Rice spoke forcefully in favor of NATO intervention to protect Benghazi in Spring 2011. Irony of ironies, she and Power agreed on that. Along with liberal interventionist John Prendergast, Power was one of Rice’s strongest recent supporters, telling The New Republic that “on the issues that are documented in [Problem from Hell], I can’t imagine someone that is better at these issues than the person that I now work with.”

All that said, a well-grounded and persuasive critique of Rice’s suitability as a Secretary of State has been made, notably by Howard French and Jason Stearns, who have laid it out very well in relation to Central Africa. In short, Rice built her career around African affairs during a crucial post-Cold War moment in which an old guard was on its way out and the United States was investing in a new crop of tough guys. Rice was in the midst of that transition, and over the years she developed strong relationships with the new U.S.-backed strongmen. So has Rice been in the corner of more than one repressive, not to say cold blooded, African leader—from Paul Kagame to the late Meles Zenawi? Yes. She’s been an ambitious political appointee at the U.S. State Department; we’re not talking about the next Secretary of Peace, Love, and Understanding. As a wise man along the train line at Kidira once told me, “you can’t walk through shit without getting some of it on your shoes,” and Rice is accused of turning a blind eye to some particularly nasty episodes of political violence, even mass killing.

I don’t hold out high hopes that Senator Kerry will inaugurate a new, more just policy towards Africa—he’s been a champion of South Sudan, but seems particularly enchanted by possibilities for U.S. oil companies there. And although his record is more nuanced than hers, he has taken positions every bit as unappealing as Rice’s on Israel and Iraq. One thing is for sure: Kerry’s not sitting at the confirmation table because of his right-minded policies towards African states. And it’s not clear that Rice’s ongoing influence over U.S. policy has come to an end simply because she withdrew her name from consideration for the nomination. Many think she’ll be made National Security Advisor, a position that needs no Senate confirmation.

Would Susan Rice have been a good choice for Secretary of State? Looks like we’ll never know. There’s no reason to imagine that her arrival would have heralded a progressive American policy in Africa, to the contrary. And by all accounts she’s hardly diplomatic. Yet neither is she single-handedly responsible for American policy in Rwanda in 1994, or the fact that the African renaissance did not arrive on time. There were very good reasons for smart, well-informed people to oppose Rice’s nomination; hats off to them. But the shit storm kicked up by the mere possibility of Rice’s nomination was a particularly nasty one, and it’s worth remembering that little of it was about what’s best for American policy in Africa.

5 thoughts on “Would Susan Rice have been a good choice for US Secretary of State?”