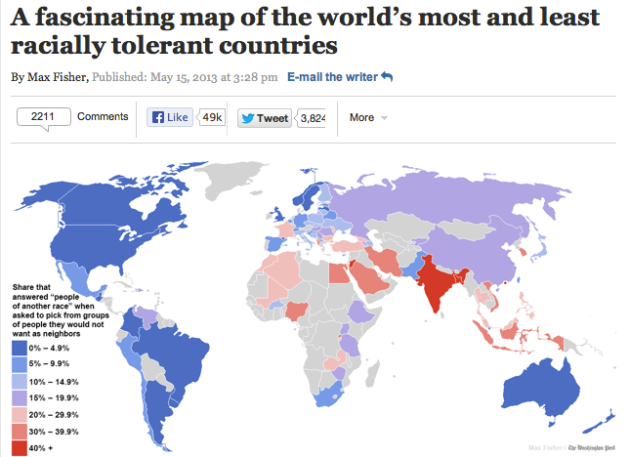 With the gutting of foreign coverage by most U.S. newspapers and the need to populate infinite Web space with content, a new creature has emerged: the foreign affairs blogger. Max Fisher, who hosts the Washington Post’s WorldViews page, is a leading exemplar of the species. Fisher’s newsy nuggets are often low-priority zeitgeist items that may or may not be vignettes of greater themes: examples in recent days include the tunnel-smuggled delivery of KFC chicken into Gaza, the video of the Czech president possibly drunk, a staff-passenger brawl at Beijing airport, and New Zealand’s “war on cats.” Fisher also concocts FAQ-style explainers on places in the news that he judges to be obscure to his readers (Chechnya and Dagestan, Central African Republic, Mali). And he is very keen on global surveys, whose results he summarizes, augments with his own interpretation, and typically renders with color-coded maps that drive home the key message.

This week, Fisher proposed to his readers what he titled “A fascinating map of the world’s most and least racially tolerant countries.” The deep-blue, racially tolerant areas included the US, UK, Canada, Australia, Scandinavia, and much of Latin America. The deepest-red, or most racially intolerant, countries were India, Bangladesh and Jordan. Russia and China fell in the middle; much of Africa was left out for lack of data, but South Africa came out light blue (highly tolerant), and Nigeria light red (highly intolerant). Other highly tolerant countries included Pakistan and Belarus.

A cursory glance at this distribution of results would suggest something deeply suspect about the exercise; moreover, anyone who studies the concept of race knows that it is hard enough to operationalize in a single-country context, let alone in cross-national comparison. Still, Fisher soldiered on, offering bullet-point findings: “Anglo and Latin countries most tolerant,” “Wide, interesting variation across Europe,” “The Middle East not so tolerant,” and the like. He offered country-level speculation: tolerance was low in Indonesia and the Philippines “where many racial groups often jockey for influence and have complicated histories with one another,” and lower in the Dominican Republic than in other Latin countries “perhaps because of its adjacency to troubled Haiti.”

Where did these numbers come from? As Fisher explained, they came from the long-running World Values Survey, which has polled attitudes around the world for decades. Fisher was drawn to the topic by news of a new paper, by a pair of Swedish economists, on the links between economic freedom in a country and its level of tolerance. (The paper was described in a post at Foreign Policy, itself a hub of foreign-affairs blogging.) To measure racial tolerance in particular, the authors used question A124_02 in the World Values survey, which asks respondents whether they would “not like to have as neighbors people of another race.” Intrigued, Fisher went back to the survey itself and, as he put it, “compiled the original data and mapped it out in the infographic” that led his post.

Although the results don’t pass the sniff test in the first place, I took a look at the data as well, in an effort to identify the exact problems at play. It turns out that the entire exercise is a methodological disaster, with problems in the survey question premise and operationalization, its use by the Swedish economists and by Fisher, and, as an inevitable result, in Fisher’s additional interpretations. The two caveats that Fisher offered in his post – first, that survey respondents might be lying about their racial views, and second, that the survey data are from different years, depending on the country – only scratch the surface of what is basically a crime against social science perpetrated in broad daylight. They certainly weren’t enough to stop Fisher from compiling and posting his map, even though its analytic base is so weak as to render its message fraudulent.

For one thing, the values for each country are indeed from different years, some in the past decade, others as old as 1990. As Fisher put it coyly, “we’re assuming the results are static, which might not be the case.” Indeed: by a rigorous methodological standard, this would be enough to throw out the cross-country comparison in the first place.

Second, a visit to some of the other tolerance questions in the A124 series reveals absurd results and design idiosyncrasies that should render the results of question A124_02, on race, suspect. The other questions ask respondents if they would accept a neighbor who had various other traits: homosexuality, a different religion, heavy drinking, emotional instability, a criminal record, and so on.

To take an example of the weakness of the data, it would appear that in Iran in 2000, only 0.9 percent of respondents “mentioned” an objection to having a homosexual neighbor, whereas in 2007, 92.4 percent mentioned it. In Pakistan in 2001, according to the survey, 100 percent of respondents “did not mention” objection to a homosexual neighbor. These are obviously particularly buggy examples, but these are the data points that the survey offers for analysts to work from; readers can visit the database to form their own opinion.

Moreover, the menu of traits available in the survey for respondents to tolerate or not tolerate varied by country. Thus, Iranians were asked about Zoroastrians; Puerto Ricans, about Spiritists; Tanzanians, about witchdoctors; Peruvians, inexplicably, about “Jews, Arabs, Asians, gypsies, etc.” (A124_33). In other words, the question about race was presented as part of a different menu of questions depending on the country, another red flag signaling a need for caution in isolating it and using it to produce grand findings. And further issues abound: as Fisher noted, self-reporting of prejudice is unreliable to begin with; as the scholar Steve Saideman pointed out, the “neighbor” question is not the best measure of tolerance; and so on.

But the biggest problem, of course, is that “race” is impossible to operationalize in a cross-national comparison. Whereas a homosexual, or an Evangelical Christian, or a heavy drinker, or a person with a criminal record, means more or less the same thing country to country, a person being of “another race” depends on constructs that vary widely, in both nature and level of perceived importance, country to country, and indeed, person to person. In other words, out of all of the many traits of difference for which the WVS surveyed respondents’ tolerance, the Swedish economists – and Fisher, in their wake – managed to select for comparison the single most useless one.

Fisher has an active social-media presence and his posts circulate quite broadly among international-affairs geeks and journalists in many countries; this one found the usual echo on the networks, plus a fair amount of skepticism. In India and Pakistan, Twitter readers were shocked by India’s ultra-high and Pakistan’s ultra-low racial intolerance ratings, both on their own merits and in comparison to each other. Lakshmi Chaudhry and Sandip Roy, at India’s Firstpost, wrote a detailed objection. (Less productively, Philip Weiss at Mondoweiss objected that Fisher’s map excluded Israel, implying that this deliberately overlooked racism in Israel – a spurious accusation, since there are no data available for Israel for question A124_02 in the WVS in the first place.)

On Twitter, Fisher engaged with Saideman but brushed off other queries, tweeting archly: “Coincidentally, readers from red countries are much more likely to say they doubt the methodology behind this study.” When I raised many of the issues in this post, he offered no response or acknowledgment at all, except to block me on Twitter. (That’s why I’m not bothering to seek comment from him before running this piece.) He summarized a few of Saideman’s objections in a follow-up post, but much of this goes down the rabbit-hole of political-science arcana about ethnic conflict and, for some reason, the specific case of Somalia. A more intellectually honest move would have been to take down the map and explain to readers why the exercise was doomed from the start.

Instead, we are left with a shiny color-coded “fascinating map” on the Washington Post site that sends a strong message of Western, Anglo-Saxon moral superiority, assorted with a mystifying portrayal of the rest of the world, and accompanied by near-gibberish interpretations – all based on a methodological process that fails pretty much every standard of social-science design and data hygiene. In other words, pseudo-analysis that ends up, whether by design or by accident, playing into an ideological agenda.

But the problem here isn’t the “finding” that the Anglo-Saxon West is more tolerant. The problem is the pseudo-analysis. The specialty of foreign-affairs blogging is explaining to a supposedly uninformed public the complexities of the outside world. Because blogging isn’t reporting, nor is it subject to much editing (let alone peer review), posts like Fisher’s are particularly vulnerable to their author’s blind spots and risk endogenizing, instead of detecting and flushing out, the bullshit in their source material. What is presented as education is very likely to turn out, in reality, obfuscation.

This is an endemic problem across the massive middlebrow “Ideas” industry that has overwhelmed the Internet, taking over from more expensive activities like research and reporting. In that respect, Fisher’s work is a symptom, not a cause. But in his position as a much-read commentator at the Washington Post, claiming to decipher world events through authoritative-looking tools like maps and explainers (his vacuous Central African Republic explainer was a classic of non-information verging on false information, but that’s a discussion for another time), he contributes more than his weight to the making of the conventional wisdom. As such, it would be welcome and useful if he held himself to a high standard of analysis – or at least, social-science basics. Failing that, he’s just another charlatan peddling gee-whiz insights to a readership that’s not as dumb as he thinks.

80 thoughts on “The Cartography of Bullshit”