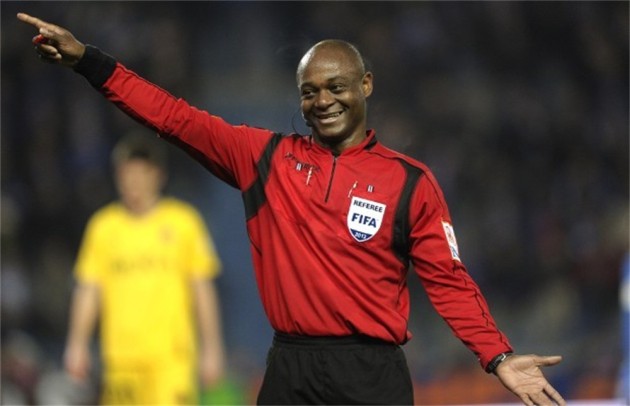 My knowledge of European club football doesn’t stretch much further beyond what gets posted here on Football is a Country and the odd link I come across on our Twitter feed (blame my wary interest on the historical underperformance of Belgian teams* and a time-consuming preference for all things music) so I was surprised to read Gabonese referee Jérôme Efong Nzolo was voted Referee of the Year by Belgian football players in this year’s Jupiler Pro League (that’s Belgium’s national competition). Nzolo was born in Bitam in 1974, came to Belgium to study for electromechanical engineer back in 1995, worked for some years in a car factory, later became a teacher and started refereeing in the national competition in 2000. National TV put the spotlight on him during his first top match some years ago. This year’s election as referee of the year isn’t his first time: he previously won in 2007, 2008 and 2009. Is the presence of referees of African descent still as rare in professional European club football as I believe it is, or should I read the footy pages more?

* This, no doubt, will change when the Belgian Red Devils manage to qualify for Brazil 2014 and go on to win the World Cup. That’s how it goes.

One thought on “Football Referee of the Year”