While we seem to spend an enormous amount of virtual space at AIAC critiquing the ways that Africa and Africans are represented, we do so because we believe that it is possible to subvert expectations, to create images that shatter myths and ideology and that make people think about why they are surprised by particular representations. It is exciting, therefore, that the journal Cultural Anthropology has used ‘Corpus: Mining the Body’, a photographic essay of West African mine workers by Danny Hoffman to kick off a conversation about visual ethnography and the visual as story telling medium, all things we are into here at AIAC.

This photo essay of mineworkers on the Sierra Leone/Liberia Border is accompanied by a written essay, citing the meaning and purpose of the images and setting them in context. Its focus, Hoffman argues, is to evoke the power of the visual to do what text cannot and to show “the materiality of West African diamond mining as labor.” Much of this meaning though cannot be easily understood without Hoffman’s written reflections.

This relationship between visual and text, ethnography and photography is beautifully taken up in Zeynep Gürsel’s accompanying response essay. The photo essay’s story-telling power about labor and bodies is provocatively articulated in Hoffman’s and Gürsel’s, as well as Alan Klima’s reflections as part of Cultural Anthropology’s forum. I am more concerned with the story we see about West Africa than about laboring bodies. These photographs — individually or as a group — will inevitably circulate with or without the text and frequently be viewed without the accompanying essay being read.

What then can the photographs tell us about Sierra Leone and Liberian mineworkers or about mining in West Africa? The photos, though beautiful — or perhaps because they are so beautiful — juxtapose hard male black bodies (often partial and truncated) against soft, yielding, red/yellow soil in a way that makes me unable to think of anything but all those critiques of the exploitation of black masculinity in the interest of Euro-American conquest, sexual and otherwise, and of the feminization of Africa waiting to be penetrated by (now) an increasing and diverse number of saviors/visitors. 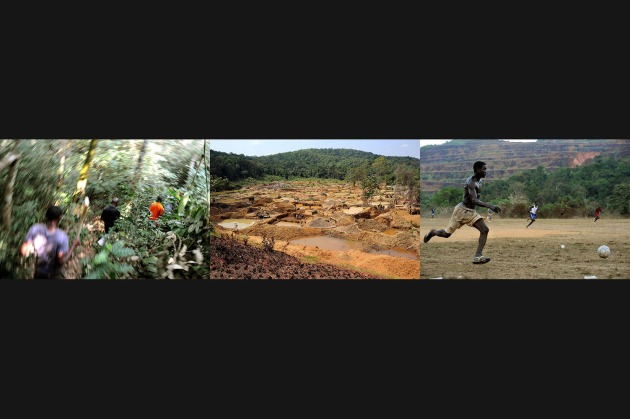 It is particularly surprising that the photos bear no context or framing without the written text. This produces the kind of flattening out of all of Africa and of all Africans so present in the many problematic tropes representing the continent; a flattening out that homogenizes and de-historizes African specificities and particularities. We know how incredibly difficult it is to create new images when expectations overwhelm most viewers/readers. I myself am clearly unable to see these images as other than troubling representations of black bodies. This is perhaps unfair, but I am looking for something in them that would shift my perspective, not just about embodied labor, but about African labor and African bodies.

I am always hopeful that just such shifting of perspective about images of Africans is possible. I have had with me now for more than 10 years a postcard from a photographic exhibit by Mimi Chakarova of a young black South African man holding a large silver pistol.

I first saw this black and white image soon after my brother was shot in a car high jacking in Johannesburg. The man is sitting on a high bar stool on dirt ground outside the kind of shack that, given the repetition of such images, effectively marks the place as South Africa, leaning back cradling the weapon in two hands and looking impassively at the photographer. The only menacing thing in the picture is the gun itself and one can easily imagine it being lifted and pointed and in a matter of milliseconds fired, because that is all it takes. Yet the separation of the person from the weapon is clear in this image. (A not inconsequential representation in light of current debates about gun control in the US.) This is a portrait of a South African man that is complex, situated and allows for the possibility of a conversation about why he might have that gun, what he has or will do with it. A conversation that has nothing to do with the ubiquitous image of black-man-with-gun required to illustrate any political event on the continent. In fact in some ways the gun becomes irrelevant in having to consider the role this young man might envisage for himself in the South Africa of the early 2000s, why he is OK with posing for the photographer, what he is saying to her as he looks directly into the camera. While I clearly had a personal response to this image, I believe that it an example of how a still photograph can be ethnographic in ways that I struggle to find in ‘Corpus: Mining the Body’.

Please join the conversations about images that change our perspectives here and/or at the Cultural Anthropology forum.

7 thoughts on “The Relationship between Visual and Text”