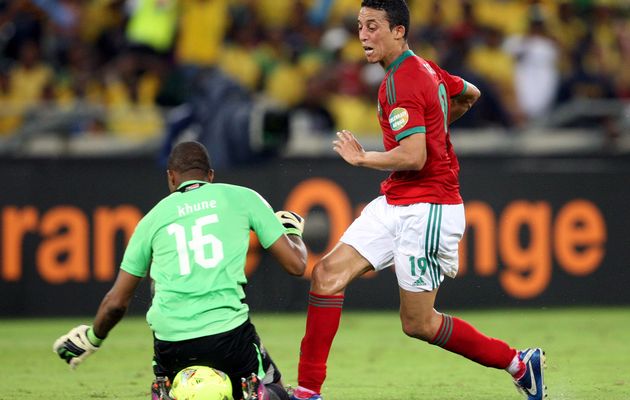 Writing in The Guardian, football journalist Jonathan Wilson noted that “… for the first time since 1992, there will be no north African presence in the quarter-finals.” He speculated as to whether this pointed to a “a significant trend of decline in the north African game.” Egypt, “the most successful team in Cup of Nations history, has fallen victim to the political upheaval there,” and did not even make the tournament. (Incidentally, their premier league is restarting this weekend.)  Tunisia failed to qualify in a tough group that included Cote d’Ivoire, Togo and Algeria.  Wilson described Algeria’s fate as “staggering unlucky,”  for outplaying both Tunisia and Togo, yet losing to both. As for Morocco, Wilson described their form as “self-destructive as ever” despite that the fact that they never lost a match at Afcon 2013.  Is Wilson right about a decline in north African football? Let’s take my team, Morocco.

In their first two matches against Angola and Cape Verde, the Atlas Lions played a mediocre game. During the Cape Verde match, it was especially frustrating to watch the Moroccan team. Each time they managed to cross the half way line into Cape Verde’s territory, the players appeared confused. They did not know what to do, and passed the ball amongst each other until they lost possession.

In the team’s final Afcon 2013 match against South Africa, the quality performance that we (their fans) were hoping to see up to then, finally emerged. For much of the match, the Atlas Lions were in the lead and managed to score two goals. Yet, in spite of Morocco’s fiery performance, South Africa came back twice and equalized to make it a final score of 2-2. To add insult to injury, the players soon learned of Cape Verde’s last minute winning goal against Angola in a simultaneous match happening in Port Elizabeth. Cape Verde’s extra goal placed Morocco in third place in Group A, thereby eliminating them from the tournament.

The best spin on Morocco’s performance in the tournament is that we may have gotten the boot, but at least we got to see the team’s potential. The question now is whether the Moroccan squad can maintain and build upon this momentum, to qualify for the 2014 World Cup in Brazil. Also the team played better than it did during last year’s tournament. At the Afcon 2012 tournament, Morocco lost its first two matches (1-2 against Tunisia and 2-3 against Gabon) and won the third game against Niger (1-0).They failed to advance to the quarterfinals. During Afcon 2013, however, Morocco did not lose any of its matches, it drew three times (0-0, 1-1, and 2-2), and nearly qualified for the second round.

The team started slow, but ended strong.  The star players were midfielder Abdelaziz Barrada (who plays for Getafe, Spain), goalie Nadir Lamyaghri (Wydad, Morocco), and striker Youssef El-Arabi (Granada, Spain). Thanks to his well-executed assists, Barrada helped Morocco score two of its goals: one against Cape Verde, and the other against South Africa. This young player demonstrated his versatility and discipline as a midfielder and striker, and almost scored himself against South Africa. The goalie, Lamyaghri, made many impressive saves, and were it not for his skill it is likely that several more goals would have been scored against Morocco. However, he must focus on blocking curl shots, which proved to be his kryptonite against the South Africans. Al-Arabi deserves recognition for his stamina and resilience. He put in a lot of effort during the last two matches, and nearly scored several times himself.

The final match did not include Morocco’s pre-tournament star, midfielder Younes Belhanda (Montpelier, France), who was suspended after receiving two yellow cards in the Cape Verde match. My sense is that if both Belhanda and Barrada played in the last match on Sunday, it is possible that we might have witnessed a Moroccan victory over South Africa.

The team’s performance leaves us with a newfound confidence, and a hunger to see more of what the team can achieve. Taoussi, who became the team’s coach in September 2012, has received the blessing from the Royal Moroccan Football Federation to continue coaching the team. Now it all depends on whether he can steer the squad through the world cup qualifiers against Tanzania, Gambia, and Ivory Coast.

So, what should I do now that Morocco has been eliminated? Ignore the rest of the Afcon tournament and live my days in seclusion and disillusionment? Of course not. Since it was Cape Verde’s last minute goal against Angola that caused our elimination, you will find me firmly planted in Ghana’s corner (one of my favorites) when they play against the Blue Sharks later today in Port Elizabeth. Go Ghana Black Stars!