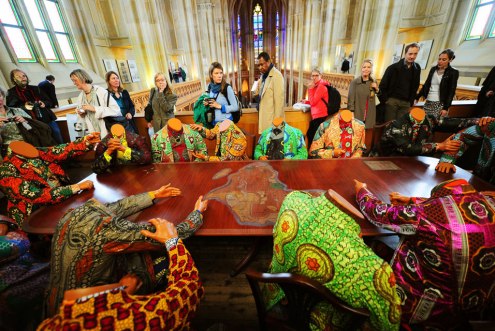 If Ethiopian filmmaker Haile Gerima’s award winning film Teza (2009) is anything to go by, Germany’s relationship to art coming from African producers can be a helpful model. After fifteen years of trying to complete his film, he was finally able to release it worldwide with some help from German backers. Gerima rewrote parts of the script to take place in Germany, and independently casted and edited the film, keeping its integrity intact. Just a year earlier, a German university funded its first professorship in African Art. But what to make of Germany’s newest arts funding program for the African continent?

The German Federal Cultural Foundation (a government program) hopes to reinvigorate its relationship to the African continent through TURN, a 2 million euro art and culture initiative that will last through 2015. Wanting to build off the desire to have storehouses in Africa for pieces of cultural memory produced and preserved by Africans themselves, they created a new international program. Their goal, they say in a press release (pdf),

is to allow cultural institutions in Germany to gain knowledge about the art scenes in African countries, and by means of cooperative ventures between African and German artists and institutions, spark new impulses in the German cultural and artistic sector.

TURN in fact encourages German institutions to stage events involved in the program not only in Germany, but in Africa as well. Much like the American Fulbright scholarship, applicants must apply in conjunction with a German institution. However, unlike the Fulbright, the German institution assumes responsibility for ensuring that all funds are spent as contractually agreed upon. On the other hand, German institutions can also apply to do research projects in Africa, they need not jointly apply with local centers. Nor will the funds be distributed by said centers. This is in line with the initiative’s stated goal, though its fairness is questionable.

And who will determine the allocation of funds?

The three-person-jury is comprised of Sandro Lunin, a Swiss theater artistic director who has previously worked in Bamako and elsewhere, Nana Oforiatta Ayim, an art writer and the only jury member of African descent, and Jay Rutledge, a popular DJ and music journalist who has closely followed popular music in sub-Saharan Africa.

TURN’s biggest critic so far is Safia Dickersbach, the PR director of Artfacts.Net, an online art database located in Berlin. Dickersbach writes on her blog:

Does “TURN” really “revolutionize” the hegemonial treatment of the value and quality of African traditions and idiosyncrasies by the European art establishment which we have observed for too long? Will the time come when numerous diverse art scenes, creative communities and cultural circles on the African continent finally be taken seriously and treated as an equal, a partner that has an opinion – a voice that must be heard?

It’s great when funds can be made available to institutions and artists to progress their work, and the exposure it receives. Hopefully the integrity of the African artists and institutions involved can be maintained through what may be an unbalanced initiative.