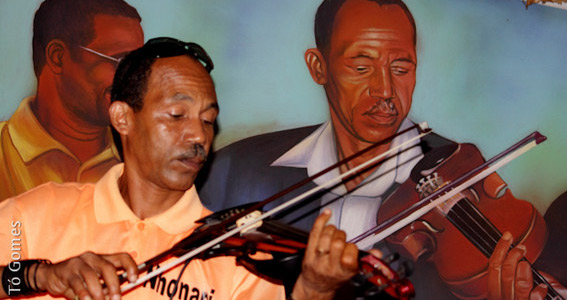 Nho Nani, a bruxo with the fiddle [Photo by Tó Gomes]

I’ve long thought the UN or the OECD ought to measure, as a development indicator, nations’ musical (and cultural) influence per capita. Cape Verde (and Jamaica) would surely top the rankings, while Norway and Germany (Modern Talking, anyone?) would be straggling toward the bottom.

While Cesaria Evora is revered in Europe, particularly in France, and by her fellow Mindelenses, she has very many peers, most of whom are less well known abroad: Bana, Ildo Lobo, Norberto Tavares, Os Tubaroes, Luis Morais. Perhaps a rung below these are Maria Alice, Tito Paris, Boy Ge Mendes, and there’s a cadre of relatively young artists — Mayra Andrade, Lura, Tcheka, Sara Tavares — pushing through. But rather than try to write about music I’ve simply posted links to songs that savour of my travels through the islands.

A friend in New York recently wrote me to insist, in response to Sodade, that Tito Paris’s version of the song is the best. You can hear it here. I still prefer Bonga’s sparer interpretation below, in which he can be heard making reference to Sao Nicolau, the home island of its composer Armando Zeferino Soares. Soares was in 2006 recognized at last as the song’s official author after many years of legal dispute.

Morna may be Cape Verde’s best known traditional genre internationally (in part because of Cesaria) but older Cape Verdeans expect, when out for an evening of live music, to also hear livelier funanas, coladeiras, and contratempos.

In Boa Vista I witnessed Nho Nani, a bruxo with the fiddle, segue among multiple genres, mesmerizing the crowd with his bow work. He comes not from Boa Vista but from Fogo, an island in Cape Verde’s southern (“more African”) chain known for wine-making, growing coffee and violin music.

Outside of Sao Vicente, one hears Cabo love and international pop oftener than the more traditional styles. Publicidade for night clubs is usually nothing more than a Suzuki Vitara or Samurai driven at an amble through the main praças of town. Fixed to the roof are enormous speakers blaring looped announcements of upcoming live performances interleaved with snippets from songs currently hotting up the floor. In Sao Nicolau, in Boa Vista, even Mindelo, three songs played over and over: The first two — ‘Moves like Jagger’ by Maroon 5 and P Square’s ‘E no easy’ — are bog-standard autotune global pop.

The third is Cabo love artist Amarildo’s highly infectious Ka bu Tchora (Cabo tears) from the album My Number One. At a Carnaval after party on Sao Nicolau, the large contingent of American peace corps volunteers ground their hips to it as hard as anyone else.

A digression: If you like Cabo love/zouk/kizomba in all its forms and want to trace its evolution and influence, check out Monique Seka’s late 80’s vintage Missounwa and Bisso na Bisso’s remake of Bebe Manga’s ‘Amio’. And if you didn’t think ‘Sinzia’ by Nameless of Kenya was a zouk track, give it another listen.

In Sao Nicolau I received a massive transfusion of digital music, too much to begin sorting through to discover what I liked. And then in Mindelo, I met people that offered recommendations and in this way, discovered Bius and Cordas do Sol, a youngish band out of the island of Santo Antão that successfully melds traditional and contemporary sounds.

In terms of the Morna greats, two names were invariably mentioned: those of Bana and Ildo Lobo. But it was the voice of Jorge Humberto that stirred me. Here are three songs from the album Identidade: Ilha Nha Ceu, Resultod and Novo Olhar.