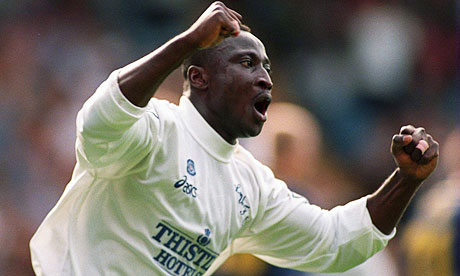 Ever since Rupert Murdoch invented football in 1992 (see Fivers passim), African players from all over the continent have lit up the English Premier League and helped turn the competition into a continent-wide obsession. (Just last week, Arsene Wenger said he had been “frightened” by the intensity of Arsenal’s popularity in Nigeria and Kenya.) African players have also scored some memorable goals in the process. So while the Premier League was busy anointing Wayne Rooney’s jammy overhead shinner from last season as the official “Goal of the 20 Seasons”–presumably only fans under the age of seven were allowed to vote?–we put the question to Twitter: What is the greatest goal scored by an African in the English Premier League? As the final day of this 20th season begins, here’s the run-down of the 10 biggest goals scored by African players in the Premier League.

Arsenal had been four up at half time at St James’ Park, but Abou Diaby’s red card and a couple of generous penalties put away by Joey Barton left Newcastle trailing 4-3 in the dying minutes. Gael Clichy headed Barton’s free-kick high into the air, and when the ball dropped steeply towards the lurking Tiote, the Ivorian simply battered a crushing left-foot volley into the bottom corner. The goal Paul Scholes wishes he’d scored, it’s safe to say the strike was well-received on local Geordie radio (“Boom, Boom, Cheik Cheik the Room!”).

Another late equaliser against Arsenal, this goal was so good it had Andy Gray pulling out the “Take a bow, son” routine that the old growler usually reserved for Steven Gerrard. With six minutes left, Chelsea’s seemingly interminable undefeated home run under Jose Mourinho looked like finally coming to an end. Essien’s strike was as sweet as it was sudden, and the curve of the ball bent so far outside of Jens Lehmann’s far post that the mad German never had a chance of reaching it.

Drogba is the leading African scorer in Premier League history with 100 goals. None have bettered this late winner at Goodison Park, which came just a week on from Essien’s effort above. The Guardian’s Dominic Fifield described the goal in his match report: “It was Didier Drogba who settled this glorious contest. The hosts were still coming to terms with the reality that their resilience had not been enough to retain an advantage, Frank Lampard having plucked an equaliser across Tim Howard and into the corner six minutes earlier, when the Ivorian gathered Andriy Shevchenko’s flick. The ball cannoned up from his chest, Drogba spinning instinctively to hammer a wondrous volley which soared for 35 yards then dipped over the goalkeeper at the last. Jose Mourinho tore off down the touchline, arms pumping in celebration, as those present gasped or wailed at the splendour of the winner.” Fast forward to the 8:56 mark in the video:

The trouble with Adebayor playing for Tottenham is that he only seems to play really well when he’s playing against them. Arsenal were leading 2-1 late into a game that would see Martin Jol fired as Spurs manager. Cesc Fabregas fired a firm pass to the feet of Adebayor, standing with his back to goal on the edge of the box, a couple of yards ahead of Michael Dawson. Rather than hold up play and look to play in Alex Hleb, who was unmarked on the Arsenal left, Adebayor gently scooped the ball up across his body and in one fluid movement blasted it in right-footed. The two touches could hardly have been more different. What made the goal even better was that just seconds earlier, Denilson had squandered a one-on-one in the most pitifully apologetic fashion. The Brazilian’s timidity made the sheer conviction of Adebayor’s strike all the more awesome.

In the first Premier League season, 1992-1993, there were, I think, only three Africans in the competition, and incredibly two of them were Zimbabweans: Bruce Grobelaar and Peter Ndlovu.*  Ndlovu, endlessly mispronounced “Und-love” by commentators, was a star of the Coventry side of the mid-90s. Nicknamed the “Bulawayo Bullet”, his goal against West Brom in 1995 was a vintage example of the relish with which he tormented opposing defenders. Fast forward to the 1.45 mark.

Andy Morrison, who had to mark Ndlovu while playing for Blackburn in 1994, recently said he thought the Zimbabwean had single-handedly wrecked his career: “I was at Blackburn, had broken into the first-team squad and was in the plans of the manager, Kenny Dalglish. But I got ripped to shreds by Peter Ndlovu… Blackburn still had a chance to win the title and were pushing for an equaliser. Time and again I was left one-on-one with Ndlovu and he tore me to pieces. He beat me on the inside and the outside until I was put out of my misery after 80 minutes. I came across him a few years later and told him that he had ruined my career. He, of course, had no idea what I was talking about.”

So good they named him twice. Or as the Telegraph match report had it, “almost too classy for the Premiership”. This was a six-pointer between two clubs fighting relegation. Picking up a loose ball, Okocha surged towards the West Ham goal from deep inside his own half, shrugged off Joe Cole, before steadying himself and lashing the ball into the roof of the net from 25 yards. The Nigerian legend scored other great goals in England, but this was his best.

A goal so good it made hardened journeyman striker Steve Claridge throw up his hands and whimper with fear on live radio. The wow-factor of the goal lies in just how implausible it was, at the moment when Demba Ba chested the ball down for Papiss Demba Cisse (this manœuvre is now known as the “Double Demba”), that Cisse could possibly beat Petr Cech from a position wide out on the left wing by striking the ball with the outside of his right foot. But that’s exactly what he did.

“Yeboah’s two goals against West Ham on Saturday were spectacular enough,” wrote Guy Hodgson in The Independent, “but last night’s had a quality that threatened to defy physics. Tony Dorigo crossed from the left, Rod Wallace headed back and Yeboah, showing no compromise to a range of 25 yards, thumped a right-foot volley that hurtled through the sultry air and crashed past David James with awesome ferocity.”

“I hate that goal,” said David James recently. “At the time, I spent quite a few weeks afterwards moaning about the fact that I should have saved it.”

It’s difficult to imagine how he would have done that. Watch it again, and bear in mind: Yeboah is left-footed. If you can’t wait, fast forward to the 3:24 mark.

Two nil down at Stamford Bridge, with 15 minutes left, Kanu came up with an incredible match-winning hat-trick. Great goals can be judged in lots of ways. One is their level of difficulty, and what Kanu did against Chelsea in the dying minutes of that match was something just extraordinarily difficult. Chasing an overhit Davor Suker pass, Kanu somehow kept the ball in play as he blocked Albert Ferrer’s blasted clearance at point blank range with a stretch of his long left leg. Chelsea keeper Ed De Goey charged out and cornered him on the by-line, and it seemed Kanu’s only option was to try to cut the ball back for Overmars and Suker waiting in the middle. Perhaps that’s what De Goey thought too, because Kanu sold him the Dutchman the most languid, the most delicious of dumbies. As De Goey slid for the ball, Kanu danced inside him, trod in a large puddle that gave up a visible splash, and from the narrowest of angles sent the ball skimming just over the heads of Marcel Desailly and Frank Lebouef and into the top corner of the far post. Watch from the 8:16 mark.

It was the best goal the great man would score for Arsenal, though this against Spurs and this against Middlesborough were also pretty special.

“It’ doesn’t need any words,” reflected Sky’s commentator at Selhurst Park that day, “just wonderment, really. The two goal cushion is restored.  It could not have been restored more emphatically.”

Now who did we miss?

* The third African to play in that inaugural 1992 season was the Nigerian Efan Ekoko, who was born and grew up in the UK and played for Norwich City in 1992. It’s a shame Nayim, the Spanish midfielder who played for Tottenham, does not count as African. He’s from the Spanish enclave of Ceuta on the North African coast at the edge of Morocco. Anyway, he could score amazing goals, like this.