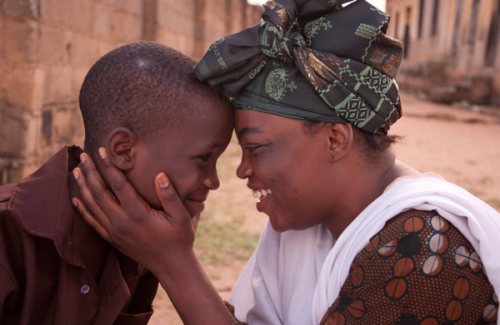 Adapted for the cinema from a novel by Femi Osofisan, ‘Maami’ is the story of Kashy’s return to Nigeria in the weeks leading up to the 2010 World Cup. A football-mad nation is wild with speculation about whether or not Kashy will decide to finally play for the Super Eagles and lead Nigeria to certain victory in South Africa, but Kashy has other things on his mind. He returns to Abeokuta, his childhood home, and begins to piece together his bittersweet early years growing up in poverty with his mother. Old and painful memories are stirred up, and must be confronted.

Ayomide Abatti (the young Kashy) and Funke Akindele (Maami, his mother) offer rich and tender performances, and work brilliantly as an on-screen pair (pictured above). Kashy’s story is interwoven with sharp social satire, beautifully rendered impressions of Lagos and a superb soundtrack – there’s even a cameo appearance by highlife master Fatai Rolling Dollar. This is bold and stylish film-making, and it deserves  a wide audience.

‘Maami’ plays on Monday, April 16, at 8.45pm at the Walter Reade Theater at Lincoln Center. The filmmaker, Tunde Kelani, will be there.

* Africa is a Country is reviewing films from the 19th New York African Film Festival (April 11-17) over the next few days.  Also come to the two panels on “Cinema and Propaganda” which we are co-presenting with the Festival on Saturday, April 14, from 1.30-4pm at the Lincoln Center in Manhattan.