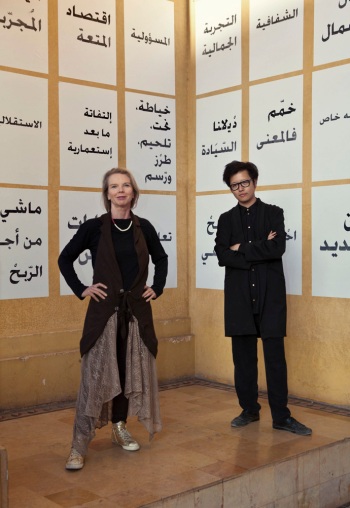 Vanessa Branson stands, hands on hips, her loosely hanging skirt tails give her the figure of a Western women making modest concessions to the predictable inquisitive gaze of an Arabic polis. Her trainers are burnished gold — a playful note — and what you wouldn’t be forgiven for calling “ethnic jewellery” is slung around her neck. She has just organized the 4th Marrakech Biennale and looks proud of this achievement. Next to her, one of the young curators, Carson Chan, is dressed entirely in black, wearing statement glasses, with folded arms submitting mournfully to the publicity shot, any visible reluctance counterbalanced by a quiet confidence. It’s quite clear who has the money, and who already suspects he knows how this image will be read.

Jamaa, a group of Moroccan and international artists who aim to make an intervention ‘for’ the biennale (but not necessarily ‘in’ it) have posted an excerpt of an email from Chan, who realizes that this photograph “encapsulates the many problematics of the biennale”. On the wall behind the two are posters which, Chan says, the interns assumed were ‘advertisement by the theatre royal’. This is a nice irony: they are in fact works from the exhibition itself. This raises an important question: who does this art speak to? The (local) participants who ‘misread’ this work of art as publicity? Or the photographer of this shot, who chose to shoot his subjects against this background to give it, as Chan ruefully identifies, an ‘“exotic” look?

There have been internet rumblings around the biennale — called Surrender — which opened two weeks ago. The centerpiece is an exhibition — Higher Atlas — which runs until May. We noted some potential problems for the project just after it opened: the program looked self-defeating: an odd selection of Western artists, too few Moroccans, and one Cameroonian. Looking at the festival’s brief history the determining factors for these priorities and exclusions become clearer.

Established in 2005 by Branson — entrepreneur and sister of Richard, Britain’s cheekiest billionaire — the festival publicity boasts it is the first trilingual festival in North Africa. Branson lives in London’s exclusive Notting Hill, but travels often to Marrakech, where she owns a boutique hotel.

In this interview, Branson admits that she still is an ‘outsider’ in Morocco, but cheerily adds that it ‘gives you a position where you can see everything coming and going’. This is a useful summary of the poor assumptions of this project: that the insights afforded to someone who travels to a city for pleasure, in publicity stunts with the super-rich, or to establish boutique hotels, can achieve anything more than brief and partial. Branson first travelled to the country during her brother’s famed (?) attempts to traverse the world in a large publicity balloon. The Branson family business is, it seems, hot air.

The biennale was, she says, an attempt to single-handedly redress the ‘social madness’ which happened after 9/11: “I tried to replac[e] the balance a little bit by having the arts festival. I know that arts can be a wonderful platform to debate topics like identity, women’s rights, freedom of speech. Free and creative thinking haven’t been encouraged in islamic countries.”

This biennale, it seems, is Vanessa Branson’s answer for Morocco’s — indeed the wider Arabic world’s — problems.

Q: Does the discussion feel liberating?
A: Definitely. There is no tradition in criticism or in reading. The Koran was the only book that was read, the first decent literature was published in the late 60ies.

But who has been liberated by these discussions? Branson — or the country of Morocco? The country, she seems to be suggesting, is feeling the warm glow of Western liberal democracy, thanks, in some small part, to this occasional program of contemporary art, literature and film. Perhaps Branson feels liberated by the idea that she is bringing the very concept of criticism to virgin lands (no pun intended). Who could have foreseen that Moroccan modernity would receive such a heroic transformation at the hands of a Western woman? Coverage of previous biennales has been similarly ridiculous, including this New York Times piece, entitled ‘Boldly Bringing Art to Old Morocco’.

The transformation of Marrakech which the biennale apparently fostered, has made the city into a ‘creative hub’. This means Moroccan artists don’t ‘go and live in Paris and New York’. Such goals are surely positive, as the ongoing debate into African contemporary art and its diaspora constantly iterates. The organizers say real exchanges that take place at the festival are made possible through the biennale’s relationship with the local university, whose students intern to help with the administration and whose families give resident artists real contact with local people.

Branson explains the thinking behind this year’s title:

Q: What says the 2012 title Surrender for you?
A: We chose this title for [its ambiguity]. It shows the world how open minded Marrakech is as a city. To the Arab speaker Surrender means Open your mind. Surrender your self to new ideas and doesn’t necessarily have a religious connotation.

The promises Branson makes for the impact of her festival are determinedly secular. As if religion should play a part in such ‘cultural’ conversations. As if Islam doesn’t represent an extraordinarily diverse and sophisticated critical and literary culture. If Branson celebrates the biennale’s stance ‘at odds with the world perception of anti Islamic feeling’, it is because her Morocco is not Islamic.

The imperative — Surrender — stands alone. This is contemporary art’s entreaty to the citizens of Marrakech: surrender your critical judgments, your religious views, your cultural background, the narrow confines of your epistemic system, shed the habiliments of your lives at the door; enter and let International Contemporary Art give you its thoughts. Resistance is futile!

Next, consider Carson Chan and Nadim Sammam, the two young curators of the Biennale’s Main Visual Arts Exhibition. Both have impressive CVs which detail extensive work in European and American contemporary art, reproduced in most of the articles on the festival. Consider their impressive eye-wear, both avant-garde and practical!

Chan is ying to Samman’s yang. Chan’s plain black robe and basic sandals represent a monkish devotion to the aesthetic. Samman wears a garment spotted with Damien Hirst’s trademark which makes him look like an outpatient at a ward for victims of post-modernity. His retro trainers, left diffidently untied, smack of weltschmertz. The building they stand in front of represents Morocco: bare and authentic, a wall for their art. The way perspective works means they are almost as tall as the building, their excessively large bodies obscure the door.

This interview with Carson Chan is instructive. It smacks of the good intentions and political sensitivities behind the whole project. It turns out Vanessa met him at Art Basel in Miami, where he impressed her with an iPad presentation of his past exhibitions. She had met Nadim at an exhibition in London the previous month. Chan’s reaction to his experiences in Marrakech mainly involve pleasurable surprise at the (presumably correct) responses by ‘visitors that have had very little exposure to contemporary art’.

Q: Did the “arab spring” affect you curating this project?
A: The so-called Arab Spring (no one here would ever associate any kind of political unrest as a problem relating to other countries…) was definitely on my mind when I started conceptualizing the exhibition. Before spending time at in Marrakech, all I knew of Morocco was what I read about in the media — a politics biased reading if anything. The very fact that we made an exhibition of contemporary culture was a response to politic-heavy understanding of North Africa.

At Africa is a Country, we approve of skepticism to do with the ‘Arab Spring’ designation, but here it is misapplied. The suggestion that political unrest is unrelated to similar struggles in neighboring countries is obviously ludicrous. If anything the ‘Arab Spring’ proved that repressed elements in society are capable of identification beyond national borders. Not ‘we want what they have’ but ‘we want what they want’. Equally ludicrous are the claims to representativeness Carson makes: ‘no one here would ever …’ But this is an exhibition, as he reminds us, which was ‘curated to appeal first and foremost to the senses’. We all have them, right? But can we say with any confidence that the senses transcend political determination? Just as Branson claims to sense Marrakech being liberated by her festival, these curators seem to think they have constructed a new sensual geography. Carson’s intuition that Morocco’s representation in the Western media is politically determined is fine, but the suggestion that these two curators could somehow achieve a radically different cartography of Morocco’s position in the contemporary world picture is absurd. Lastly, his measurement of normality (‘[p]eople here’ are ‘just like everywhere else’) is worrying: Carson’s discovery that ‘[p]eople here’ are ‘just like everywhere else’ is founded on the fact that many Moroccans he has come across are active participants in global capitalism, identification through shopping or using the internet.

The interview ends on an odd note: Chan notes that the ‘exhibition vernissage’ was for him the most stimulating part of the whole project. Is it cruel to suggest that this is telling — that the curator’s favorite moment happened before the public entered?

In response to an invitation to participate in the biennale, Jamaa formulated an intervention which manifests itself as a ‘Proposal. Statement. Interview. Conversation.’ (You can read it here.) It makes a series of implicit criticisms of the theoretical grounding of the biennale. Quoting from Chan’s essay in the exhibition’s bilingual (English and French) catalogue it seems the organizers are trying to be sensitive to the political problems they face. Chan seems blithely positive about the impact of such events, which “not only bring with them a diversification of how art is defined and culture disseminated, but the financial incentives from cultural tourism (i.e. increased hotel, restaurant, retail, and transportation revenue) and the suggestion of societal maturity [which will] have a visceral effect on the local economy and culture”. Post-colonial questions into the politics of this ‘maturity’ is, Chan believes, “like beating an old horse”.

If this commentary has appeared gratuitously aggressive, it is because there simply has not been careful enough thinking into the politics of local and global, of how international contemporary art maps out the countries which it claims to be constituted by. This event could have staged conversations with the rest of the world which originated from within the community itself. Branson’s money could have been spent on a project which actually engaged the local culture, bringing it into a new conversation with an international community. For Chan, this exhibition took place in a country “like any other”, for an audience that isn’t “uniquely different”. These statements refuse to acknowledge that an exhibition of contemporary art constitutes a gesture always partly determined by the culture in which it is staged. The lack of thought about what this culture might be is unforgivable. The organizers don’t seem to really care. We must remember, after all, we have been told to surrender ourselves.

2 thoughts on “The Branson Biennale for Morocco”